What do astronauts do? You may think about astronauts performing space walks, operating spacecraft, landing on the Moon or floating about in zero gravity. However, we often don’t realize just how much astronauts do outside of space. Here’s a peek at what it’s like to be an astronaut. 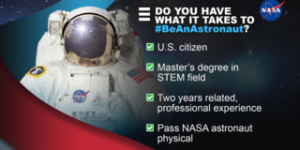 NASA astronauts must have a master’s degree in a STEM field (Science, Technology, Engineering, Mathematics) plus two years of relevant experience to meet the application requirements. Alternatively, they may complete at least 1,000 hours of pilot-in-command time on a jet aircraft. NASA’s first astronauts, including John Glenn, Alan Shepard and Guss Grissom, were military test pilots.

If someone does not meet either of these requirements, there are some exceptions for people who are two years toward their doctorate degree in a STEM-related field, A completed Doctor of Medicine or Doctor of Osteopathic Medicine degree or someone who has completed a nationally recognized flight school program.

Fewer than 1% of applicants are selected as NASA astronaut candidates—and that’s just the beginning. Astronaut training is a rigorous two-year process that involves both classroom work and physical tests.

Trainees hoping to serve on the International Space Station (ISS) must learn Russian so they can communicate with the Russian Mission Control Center. The physical training includes not only training in zero-gravity conditions but also training on land and in the sea, all while wearing astronaut equipment or scuba suits.

Other space organizations, such as the European Space Agency (ESA), also have a tough selection process. According to the ESA website, some astronaut candidates have to wait approximately a year and a half to learn whether or not they have qualified for the selection.

Most Astronauts Work on the International Space Station (ISS)

Most astronauts today work on the International Space Station—better known as ISS. Launched in 1998 as a collaborative effort between countries, the ISS is a research facility that orbits Earth. Research stemming from the ISS benefits life here on Earth and has taught us much about diseases, the human body, technology, natural disasters and much more. To cite only one example, we owe much of our knowledge of Alzheimer’s disease to ISS research. Space is the ideal place to study this neurodegenerative disease because gravity prevents the nuerofibers associated with the disease from collapsing under their own weight. 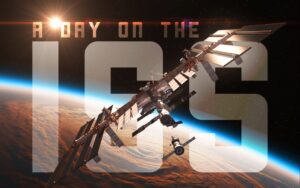 There are typically 3-6 individuals working on the ISS at any given time. Like us here on Earth, they have an allotted work day, much of which is spent conducting research and performing maintenance tasks on the ISS itself.

There are specific job roles aboard the station, including the ISS commander, who is in charge of the expedition. “Expedition” refers to the group that is brought in to relieve the previous group of astronauts working. Each expedition also has a pilot, who can fly their spacecraft (either a Russian Soyuz capsule or a SpaceX Dragon spacecraft) to and from the space station.

According to Space Coast Launches, the average day of someone working onboard the ISS allows for 8.5 hours of sleep, 6.5 hours of work and a mandatory amount of time for exercise and lunch—with the rest of the time being free time.

Astronauts Eat a Lot of Food

Not only do astronauts put in a full workday, everything is more difficult in space. Simple tasks that we take for granted are more challenging due to the effects of zero gravity. Where do astronauts get the energy to work for long durations? From their diet! According to NASA, male astronauts eat around 3,200 calories daily, while female astronauts consume about 1,900 calories.

“Astronaut food” is similar to what someone might eat on Earth, but the preparation required is slightly different. Most of the food taken on expeditions is dehydrated. There are no fridges on the ISS, so astronauts must have food that does not quickly spoil. Some food can be eaten directly from the package, while others may require added water.

Showers are not a normal part of an astronaut’s routine in space. NASA astronauts wash their hair and body in space by using soap packets and packets of water. Although the process is a little bit more tedious than how we would clean ourselves, there has to be some creativity when living in zero gravity. Karen Nyberg, a NASA flight engineer for Expedition 36, demonstrates how she practices hygiene on the ISS in this video.

Their Entire Body Can Experience Changes

Here on Earth, our bodies are used to the gravitational pull. Our muscles must work against gravity as we move about. When there is little to no gravity, there is no support for the bones or muscles, leading to a risk of muscle mass loss. Astronauts must spend a portion of their day performing Earth-like exercises to prevent muscle wasting.

The ISS has three machines designed to give astronauts a full-body workout, including an exercise bike, a treadmill, and a special weightlifting machine for resistance training. In fact, the technology behind this resistance training was inducted into the Space Technology Hall of Fame in 2019 and is available for use here on Earth at home or in gyms/sports clubs.

Astronauts must sleep in sleeping bags strapped to a wall or floor to prevent them from literally floating away into dreamland! In this video, Canadian Space Agency (CSA) astronaut Chris Hadfield demonstrates how to sleep in space. He mentions that because there is no gravity, there is no need for a pillow to support the neck and head.

So, What Do Astronauts Do On Earth?

Astronauts don’t spend their entire careers solely in space. There is space-related work to be done on our own planet. Some astronauts continue military careers or careers in aerospace, work in ground-based roles at NASA, become public servants, or work in education. 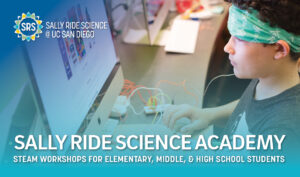 Many retired astronauts become public advocates, sharing the important work of space exploration and STEM as a means of bettering life on Earth. For example, after Neil Armstrong’s famous mission to the Moon, he spent some time working for NASA as the Deputy Associate Administrator For Aeronautics, but later became a professor at the University of Cincinnati, educating people in aerospace engineering. Sally Ride, the first American woman in space, became a physics professor and co-founded an educational company.

Do You Want to Learn More About Life as An Astronaut?

Space Foundation Discovery Center has in-person and virtual educational opportunities for anyone who is interested in astronaut life. Plan a space mission and see exciting space artifacts (including space suits) in El Pomar Space Gallery. Program and drive robotic rovers across a simulated Martian terrain at the Mars Robotics Laboratory or explore the wonders of the universe with Science On a Sphere®.

Discovery Center also has resources for students such as a virtual series titled Audience with an Astronaut, where students can learn about astronaut life with ​​Retired Astronaut Lt. Col. Duane “Digger” Carey.